Blue Star Memorial Markers in the United States pay tribute to the U.S. Armed Forces. The National Council of State Garden Clubs, now known as National Garden Clubs, Inc., started the program in 1945 after World War II. The Blue Star was used on service flags to denote a service member fighting in the war.
The Blue Star Memorial Marker sponsored by the Garden Club of Cape Coral will be located in Eco Park just off of Veterans Parkway. Our Fashion Show Fundraiser for this project was a success and our Club is now able to buy the Blue Star Memorial Marker for our Armed Forces Past/Present/Future, pay for the permit, and the installation. The next stage will be to set up Committees in April/May of 2020 to work on the various aspects of our Installation and Ceremony. Our Ceremony will be held in November 2020 and will be also celebrating the 50th Anniversary of Cape Coral. 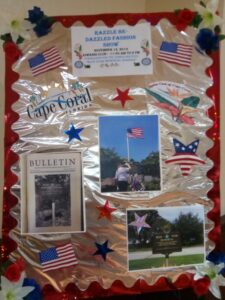 To raise funds for the Blue Star Memorial Marker, the Razzle Be-Dazzled Fashion Show Fundraiser will be held November 12, 2019 at The Yacht Club from 11:30 am to 2 pm.
Thank you to Razzle Dazzle Boutique for sponsoring this magical fashion show.
Lunch will be provided by the Garden Club of Cape Coral.
Tickets are $20.00. Reserve now! Seating is limited!
Reservations can be sent to:
The Garden Club of Cape Coral
P.O. Box 152022, Cape Coral FL 33915